What is reddit's opinion of Worthy to Escape: Why All Believers Will Not Be Raptured Before the Tribulation?
From 3.5 billion comments
Created by @mouseofleaves.
As an Amazon Associate I earn from qualifying purchases. 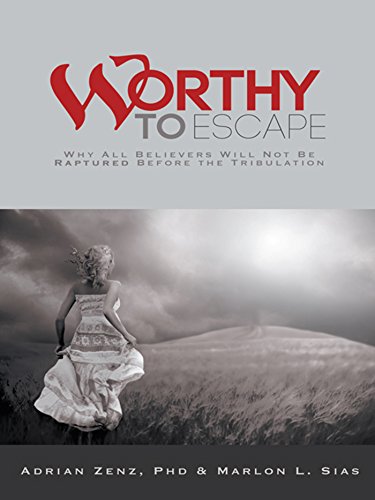 This product was mentioned in 12 comments, with an average of 4.58 upvotes

Zero evidence. Literally the one reporter who came up with that number is a German Evangelical Christian who thinks 2 raptures are coming. Adrian zenz book is on amazon [link]

Take a look at all of those articles, they refer to the same sources. Just because something is reported through multiple publications doesn't mean it's credible. Namely Adrian Zenz who has been disproven multiple times.

You can read his other credible works such as: [link]

Where he talks about the coming rapture and how Jesus will save believers.

The method used to count the "millions" of Uyghur's in camps were from interviewing EIGHT people and asking them to estimate how many people were being detained in their town.

"CHRD, based in Hong Kong and Washington DC, interviewed dozens of Uyghur people in Xinjiang. Interviewees gave estimates of how many people—ranging from 8% to 20%—were being detained in their towns. It averaged out to 12% and CHRD bumped the percentage down to 10% for a conservative estimate, ultimately giving them 1.1 million Uyghur Muslims imprisoned.

Eye witness testimony can be unreliable. For example a commonly referenced woman named Sayragul Sauytbay tells a different story everytime she's interviewed. In one testimony she said she saw rapes, medical experiments and was beat.

In another she said she didn't see any violence directly.

Regardless, witness testimonies must be taken with a grain of salt, see the Nayirah testimony for example where atrocity propaganda had everyone believing that babies were being thrown out of their incubators: [link]

There's a new cold war going on and your consent is being manufactured just like the Iraq War.

He's a nutcase fundamentalist religious zealot, frankly. I'll allow that it's possible he could also be correct in some of his assertions, but it's definitely rather incredible that he's the main source for many if not nearly all Xinjiang pieces.

>Zenz’s work on China is inspired by this biblical worldview, as he recently explained in an interview with the Wall Street Journal. “I feel very clearly led by God to do this,” he said. “I can put it that way. I’m not afraid to say that. With Xinjiang, things really changed. It became like a mission, or a ministry.”
>
>Along with his “mission” against China, heavenly guidance has apparently prompted Zenz to denounce homosexuality, gender equality, and the banning of physical punishment against children as threats to Christianity.
>
>Zenz outlined these views in a book he co-authored in 2012, titled <em>Worthy to Escape</em>: Why All Believers Will Not Be Raptured Before the Tribulation. In the tome, Zenz discussed the return of Jesus Christ, the coming wrath of God, and the rise of the Antichrist.
>
>Zenz predicted that the future fall of capitalism will bring to power the Antichrist within a “few decades.” He identified the force that “will usher the Antichrist into power” as “the economic and financial fall of ‘Babylon,’ with ‘Babylon’ symbolically representing the world’s global economic system (capitalism).”

The fact that he works for a right wing US based NGO already should already make you highly skeptical. It's like trusting Breitbart for your info on Obama. On top of that the fact that he doesn't speak Chinese and have never been to China yet is cited by the media as a primary source is highly questionable. I'm just saying you should be very skeptical of anything he says.

>Do you have a source on how all the evidence comes from Zenz?

Not all of it comes from Zenz, he's just one of the main sources, especially for the claim of millions of Uyghurs being incarcerated.

Just looking at the sources citied in the comments on this post we have:

All of these are sources have a vested interest in drumming up opposition to China and with all of them the actual evidence is pretty scant when it comes making claims of genocide. Like I said, it's like trusting Breitbart for your info on Obama.

It's clear there is an increase in surveillance and people are being incarcerated in Xinjiang. This is in response to terrorism by Uyghur nationalists with dozens of terrorist attacks killing hundreds of people. The US is actually drone striking Uyghurs. So I really wonder what people expect China to be doing to combat terrorism here. Should they be bombing people like the US?

>Unfriendly reports in the media, how does this constitute an action by the Australian government which affects China directly?

The information upon which these reports are based is more often than not provided and pushed by ASPI, a think tank that receives the majority of its funding from the Australian Defence Force and other federal government agencies. The media’s uncritical peddling of their hawkish propaganda on behalf of Australian and US military interests creates an environment conducive to acts of aggression by Australia and its allies against the PRC (as was the case with respect to Iraq in 2003). This is not rocket science, and China would have to be either patently stupid or entirely ignorant of history to ignore the intent here - which, clearly, it is not.

>Should Australia do as China does and censor all media to fit an official media?

I'll assume this was delivered ironically, given that even a casual observer of the Australian media landscape over recent years would be aware that this is precisely the direction we’re headed, independent of any alleged interference by the CCP.

>The threat is that China will wage trade war and refuse normal diplomatic relations unless these demands are met, without any reciprocation...

Well in order to reciprocate they'd first have had to initiate a relentless, months-long front-page media campaign criticising Australia's internal governance while citing as evidence 'research' of an apocalypticist fanatic on a mission from God.

>...which is apparently acceptable to certain fifth columnists.

Well I guess I'll go ahead and scratch 'Reds Under The Bed' off my Cold War bingo card! Bless.

Oh yeah, definitely, the guy is 100% nuts. And even if you want to entirely disregard his background there are still the grave methodological errors he regularly makes like mixing up 8% and 80%...

I haven't looked at his latest "research" in depth but I wouldn't be surprised to find the same type of "mistake" that conveniently leads to the same grand claims about oppression etc.

I understand your concern for basic human dignity. Its one that I share of course.

The methodology for the initial discovery is laid out a bit here.

I saw in this section its mentioned how they arrived at such a massive estimate of Uighur detainees. By interviewing only 8 people...

This story seems to have been wildly sensationalized.

Adrien Zenz also apparently wrote a book about how the fall of capitalism will bring the rise of the antichrist? Zenz also apparently views “postmodern relativism and tolerance thinking” and their apparent promotion of homosexuality, gender equality, and non-violent parenting to be threats to Christianity and “[t]he deceptive, leopard-like power behind the Antichrist.”

This of course does not outright discredit these claims.

> A communist telling me somebody's right wing, what a fucking joke

Don't take my word for it. The nutjob wrote a book expressing his own views.

I find the reports of Chinese oppression of Uyghurs very concerning and it is clear that something terrible is happening.

However I think the first point, ie that millions have been rounded up into camps should be treated with a lot of scepticism. The two sources you have given are both untrustworthy and both use inaccurate methods to estimate the amount of people impacted.

As far as I know, this (a report from the US based NGO, CHRD) is the source of the first part of your estimate. It extrapolates the entire region from the testimony of 8 people. That is just not an accurate way to come to the conclusion that 10% of the population of a region with 20 million inhabitants are being detained.

The second part is a source named Adrian Zenz. He is a rapture believing wacko who believes himself to be on a mission from God against China.

I got the above information from here: [link]

It seems clear that China is doing something awful to repress a terrorist threat but that is no reason to blindly believe obviously untrustworthy statements as you appear to be doing.

> There is plenty more material out there for you to read

It's time YOU vet your sources.

The main sources behind the Uyghur death camp propaganda is Adrian Zenz. You can see right here on wikipedia.

Zenz is a religious nut who believes TWO raptures are coming. He details it in his book Worthy to Escape.