What is reddit's opinion of Zacurate Pro Series 500DL Fingertip Pulse Oximeter Blood Oxygen Saturation Monitor with Silicon Cover, Batteries and Lanyard (Royal Black)?
From 3.5 billion comments
As an Amazon Associate I earn from qualifying purchases. The following content includes affiliate links for which I may make a small commission at no extra cost to you should you make a purchase. 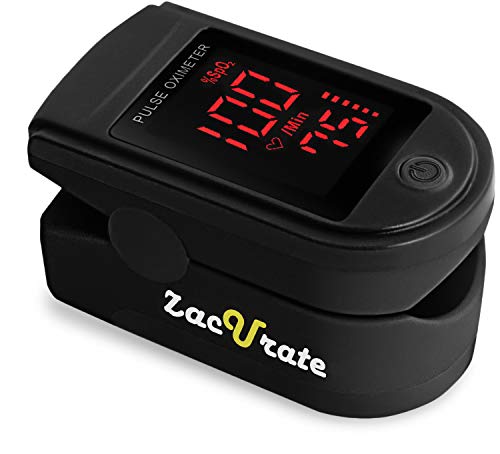 This product was mentioned in 40 comments, with an average of 1.70 upvotes

We just got an email about that as well. Fortunately it seems to be voluntary still - like that children's offered to accept some older patients to help with overflow at other nearby hospitals.

I completely agree that it is going to get much worse, VERY quickly if we become full.

Also, here's a link to the pulse ox I bought. I agree that this is a very helpful monitoring tool if you have COVID and a important measurement to help know when to go to the hospital.

I’m sorry to hear about your family... You might advise them to grab a pulse oximeter on Amazon - they’re about $30, and can provide insight into whether they need to go to the hospital (if their blood oxygen drops into the low 90s).

If you want, I got this one and it seems to work fine (just have to jam your finger all the way to the back and let it sit still on the table while it finds your pulse): [link]

Here you go my friend!

I wish you the best, if you can, get one of these. O² saturation dropping over time (<90) can be an indicator for a more serious development and you might not notice it.

If it's not a hardware issue, you can follow the connectivity issues guide from the sidebar and post results.

This is a good one.

Order a decent pulse oximeter on Amazon. I got this one and it's been fantastic for tracking my O2 levels. I have a bit of medical hypochondria and anxiety, so I constantly check things to keep myself sane.

If you've actually got the 'rona, don't trust in your lips turning blue or waiting until it feels hard to breathe, it might be too late by then. Get the oximeter, if your levels drop below 93% consistently, go to the hospital.

As insane as your parents sound it seems like nothing in this world is going to change their minds until you or anyone in your family needs to get admitted to the hospital. If you are showing systems OP best you can do is to monitor yourself. If you can find yourself a pulse oximeter and see what your oxygen levels are at. Symptoms of COVID are low oxygen saturation levels in the blood. Normal is between 100%-95% sPO2. Anything less than 90% requires supplemental O2...basically you need to be seen by a medical professional.

Source: I am a medic.

amazon! they're 30 bucks. get the one called "zaccurate" as interestingly enough, it's pretty zaccurate. For a bit there was a run on them, but now they should be easy enough to find.

if you are not in the US and have trouble amazon-ing things, or just want to support another business - search "pulse oximeter"

meanwhile - here's a link to the one I have: [link]

I personally have a Zacurate pulse ox in pink. My local fire department has it in black, and though I doubt color changes effectiveness, here's the link!

Side note: It's quite reliable, I tested it against monitors in the ICU once and it was two points off, at most.

Here's the link, got it off Amazon.

It was kinda funny I actually ordered it a few days before I got sick because I knew baby is coming right in the middle of this RSV wave we're having right now so I wanted it on hand for that. I'm grateful to have another tool in hand just in case ♥️

I have this one, works great.

It’s the device they stick on your finger at the doctor’s to measure your blood oxygen level. You’ll want to monitor it to make sure it doesn’t go too low. Also, it’s just good for peace of mind. Here’s one from Amazon that I’ve been sending to my family.

First off, don't panic! Our doctor told us pregnant women aren't at higher risk of getting symptoms, just that symptoms can be more taxing since you've got a baby on board! I'd run any advice by your OB, but it might be a good idea to snag a blood oxygen reader from Amazon(don't know about this model, it's just a well-reviewed one). I've heard reduced blood oxygen is the first sign of more severe symptoms.

While it may scare you a bit, you can rest easy once you know what it is and that it won't last (or kill you). Stress plays a huge part in how GERD affects the body so while it may sound easy - you have to try to relax. And feel free to ask questions here if you're new to this and not sure if something is "normal". When I first got GERD and LPR, it was brought on by Stress. I had crazy panic attacks, didn't sleep for weeks, horrible stomach aches and nausea for months because I didn't know what was wrong with me. Since being diagnosed, I realize that the stomach/ throat issues are normal (although very frustrating) with this disease and so i no longer have the panic attacks and I can sleep a bit.

If you've ever been to the hospital with shortness of breath or any kind of chestpain, the oximeter is the little clamp thing they stick on your finger. It's typically the first thing they do. It measures the oxygen in your blood in seconds. I got mine off of Amazon:

There are cheaper ones available as well. It helped and still helps give me peace of mind whenever I feel shortness of breath because of this horrible disease. It reminds me that I'm fine, my body is getting enough oxygen and that the feeling will pass.

Also, this sub is full of good info to help you avoid the ER visits (I've been 4 times while figuring this all out)!!! Most of the threads on here will give you useful advice on what changes you need to make to your diet (a lot if you haven't already started), sleeping position (on an incline), and medication to help ease your symptoms to help you get this under control. Good luck

You're behind the times. A lot.

Even in clinics & E.R. settings, they use the non-invasive sensors and have for years.

They're very affordable now... here's a link to one on Amazon and there are even less expensive ones there too.

Interested to see this post... I saw that pulse oximeters are less than $30 on Amazon so I got one a couple of weeks ago just for the hell of it. Amazon link.

Just buy one and prove people wrong yourself. Plus it is a very handy tool to have right now. [link] 30$

Not OP but I have this one and it works great: Zacurate Pro Series 500DL... [link]

I have a great job, so wearing a mask hasn't diminished my oxygen levels or my work performance. How do I know what? That she's not a OSHA director? Do your research before writing a misleading title like CNN. Also she has had OSHA training, but for construction. She's not a doctor. She might know if some sort of information for her field, but she doesn't know how bodies work. I love that she works in construction and she knows a lot about her field, but she is not a doctor. If you are worried about oxygen levels while wearing a mask, buy a pulse ox, which measures oxygen. They sell them at pharmacies and amazon: https://www.amazon.com/Zacurate-Fingertip-Oximeter-Saturation-Batteries/dp/B07PQ8WTC4/ref=sr_1_5?dchild=1&amp;keywords=pulse+ox&amp;qid=1595813116&amp;sr=8-5

If you dont want to go out anywhere and have Amazon Prime:

OP you might get a oxygen pulse oximeter to measure your oxygen level. A late enough iwatch model will do that, or you can get something like this [link]).

Get an oximeter and pay close attention your oxygen levels

just for your reference

I've read that if you're going to have a bad turn, it will happen around day 10 after symptom onset. I also just read that heart & kidney complications can occur as late as three weeks in (source).

I would recommend that you get yourself a pulse oximeter ASAP, if you don't have one. This is the one I bought. Only $20, and with Amazon Prime you should be able to get it by the end of the week. If you want one faster, you might be able to find one at a local drugstore (or, er... send someone who is not sick to go find one for you). Silent hypoxia is a possibility with covid, so it's good to test your blood oxygen regularly. Keep on eye on it throughout the day, and if it ever drops below like 94 then you might want to call a doctor.

I'm on day 24 myself. My first two days I had a mild cough, day three I got the feeling I should probably get tested, day four started okay but then I developed a high fever and spent the afternoon drifting in and out of consciousness, and I got my positive test result late that night. After day four I was completely exhausted, and it took me a solid week of sleeping to begin feeling like my energy stores might be returning to normal. At some point in there my senses of smell and taste left me, but then they returned within a week. (I also started coughing up pink and orange sputum, which was alarming, and if I had a GP I probably would have called them. But knowing that covid makes the blood vessels in your lungs leak helped my rationalize that particular symptom, and because my blood oxygen stayed high and I wasn't having difficulty breathing/chest pains, and because I wasn't coughing up a lot of blood I... stayed calm. After maybe three days it stopped.) Anyway. Two weeks after symptom onset I was feeling completely normal except for the residual fatigue. Today my energy still isn't back to normal, but it's getting better every day.

Dunno if my symptom timeline is helpful for you, but maybe it can give you an idea of what to expect from a mild case.

This is the one I bought: [link]

Here is a non-invasive device that tells you the percentage of oxygen in your blood. Certain other things can be measured via optical means.

I hope you stay well ! Below is a link for a pulse oximeter (FREE DELIVERY, NO PRIME- if this changes do prime trial for 1 dollar, and cancel just after delivery)

It may seem silly but, when my a member of my family had Covid it gave us an early alert that her oxygen may be dipping a bit too low to stay at home. Also if you feel strange or faint, or like you cannot stay awake and, your oxygen dips even a little that may be a sign that it is time to call 800-CDC-INFO (800-232-4636). You'll have a viable number to report to them and, be able to get some solid advice!

This is the one that I used during my illness.

I bought this one: [link]

Oximeter to measure your oxygen levels

This one has a ton of reviews but there are plenty others on Amazon reviewed to do well https://www.amazon.com/Zacurate-Fingertip-Oximeter-Saturation-Batteries/dp/B07PQ8WTC4

I've had this one almost a year (Amazon link) - I've compared it with a few others, and it works well. Reviews are good too. Good luck!

Increasingly so, since they're becoming easy to get and affordable.