What is reddit's opinion of BIG Launcher Easy Phone DEMO?
From 3.5 billion comments 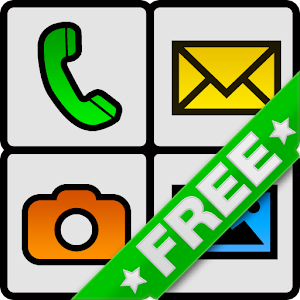 This app was mentioned in 38 comments, with an average of 2.89 upvotes

Found this one a while back. I haven't used it for more than a couple minutes but it seems like it might be what you're looking for

If a greatly simplified phone UI could help then perhaps look into a launcher like this.

It includes a simplified dialer and if I recall correctly a sms app.

I was looking at apps like Big Launcher, but figured my FIL might find it too patronising (he's barely turned 50)

There's a bunch of simple, senior-orientated launchers on the app store.

Okay, you can ignore my previous comment, I've found just the thing! It's called BIG Launcher and it lets you set shortcuts with massive buttons, including direct call buttons for your contacts. Plus, you can enlarge the text so it's easier to read.

I tried it myself and it works great - the only problem is that you can't view your call history from the app itself.

I've linked the free demo here, and you can try it out before purchasing the full app.

Buy any cheap android phone probably a Moto E2 or something and install a custom launcher. This one for example [link]

A couple apps that might be useful are these (Big Launcher and Big Phone): [link] [link]

Though I installed them and checked and even they don't have the auto area code option. You're not crazy though. Googling around I can find clear instructions on how to turn on auto area code for older versions of android. On my S10 and S8 though, those options are not there. It probably just wasn't a popularly used option and they dropped it.

[link] It has made the smartphone much easier for my mom to use and not get lost in all that the phone has. I'm not sure what a suitable Iphone substitute would be.

I have this one saved in case that issue pops up for me. Here's the free demo, the full version is $10 unfortunately but perhaps worth it. [link]

Best advice I can give you is to get an eink phone and install a launcher on it.

Maybe Big launcher or another type of minimalist launcher - best to try and see what fits you best.

I recommend you an app Big Launcher (or some other app with the same functionality). It requires some pre-configuration, but after you've set all up managing the phone becomes much easier for older people.

Besides, this app have large fonts for easier reading,

Searching for "launcher for old people" on the Play Store there are things like this or this, the first one is uglier, but both seem like they could work for older people who need bigger buttons and simpler control.

Customizing your home screen for one. Apple forces you to order your apps from top-left to bottom-right (which is totally counterintuitive to the most commonly-used finger being the right thumb) with no option to change font, font size, column or row count, icons, icon size, or even rename things besides folders. There's also no app drawer (forcing many users to shove their unwanted system apps into a folder) and widgets are forced on to a dedicated widget page which is asinine.

This is even before getting into highly customizable wallpapers like KLWP or custom launchers like Big Launcher for seniors or disabled people.

I did something similar for my mother. I didn't use Nova launcher and chose Big Launcher. It's a bit pricey, so I just got an apk off a website. It's much easier for her to use and she doesn't have any difficulties with it.

Have you considered using a custom launcher? You could get her a Motorola G4 for 150-180 bucks and use a launcher like BIG Launcher (just an example, there's dozens if not hundreds of these launchers and I bet someone here has experience with a couple of them)

If the elders have weak vision or some vision related problem, then this launcher is best:- Big Launcher This launcher makes everything big and easily readable, it even comes with Big Dialer, Big alarm, Big SMS, Big notifications and to take things things to the next level there is Big icon pack

Free version to try it out

You should try these apps. I am using it for my grandparents. It makes launcher look like those old nokia phones. I am sure these apps will help you. ( Try both of them & try to buy full versions.)

There are other themes, So try those themes ,too. I will recommend you to buy it. It's 2$.

Also try this app. My grand parents liked this app.

Alternatively, You can use Nova launcher or some other launcher & set it up with useful widgets. ( I also tried this , But it was hard to impress my grandparents. So, It was hard to set up for me.I ended up using koala launcher & Big launcher)

I don't know if it suits you but you might want to check BIG Launcher.

You can use almost any Android tablet. All you have to do is replace the launcher (the user interface) with a senior friendly one, of which there's a large selection on the Play Store. I've installed this one for a senior with no prior experience:

Don't forget to set it as default!

It's worth noting that Amazon Fire tablets require additional steps in order to install custom launchers and may randomly revert to the godawful and incredibly cluttered one that comes with them, so I would not recommend one of these, even if their low pricing is tempting. The competent and affordable Samsung Galaxy Tab A 10.5 is probably the best choice. It's large enough, has good battery life, you don't have to battle stupid Amazon services, there's an additional voice assistant (Samsung's Bixby, which some like and some don't) and in terms of specs and software, it's ideal for the job. Do get a projective magnetic cover for it!

I would also recommend installing AnyDesk on the device and on at least one of your devices, which is a software that allows you to view the screen over the Internet, highlight things to press and even press buttons for them. Set it up so that there is no interaction needed on the device itself and test it thoroughly beforehand. This is extremely important, since it solves the problems you've been having with guiding your dad over the phone alone. Write down their AnyDesk ID and the access password somewhere, just in case.

I can tell from experience that the elderly love voice assistants. It's a technology that has been envisioned by sci-fi shows and movies since at least the 1960s and their use is inherently intuitive. That said, you have to give them some pointers in order to avoid frustration: Most elderly will try to talk to them as if they were humans, use unnecessarily verbose language, say please and thank you, which often leads to suboptimal results. I would also recommend telling them about both the possibilities and the limitations of this software beforehand and the privacy implications. Install several different ones so that your dad can pick his favorite. Print out a sheet with common commands for each voice assistant that are guaranteed to work.

To expand a bit on the launchers, Android always had since the beginning, the ability to change launcher. Since it's literally just another app that you can launch by pressing the home button you can even have as many as you want. This is why pretty much every one has slightly different ways of doing things, a Samsung phone won't have the same launcher an LG one, but they still can. Just install Nova Launcher on both and done. A few years ago, there was a revolution craze and there was a fuckton of launchers. Some were down to earth no bullshit, productive with great ideas. Others were crazy wild, sometimes not even that useful but very creative. Pretty much everything that can be thought for launchers has very likely been done already.

These days, launcher are really good and do pretty much everything you could ever want, from gestures for everything, organization like folders, widgets, sort apps by category, allow launcher, rotation, news, badges (how many unread emails over the app icon), night mode that adapts it's colors to the time of the day, if you want a button or slide up to access your apps, how many home pages you want, how many icons and it's size you want showing, how fast and what animations for home page transitions you want and many more. And this was just Nova Launcher which is probably one of the best ones and a good gold standard full of features.

But it's not always about productivity. Let's say you want your grandma using a phone. You can buy whatever phone suits her best with a big screen and just install, say, Big Launcher. She will see it well and likely have no issues touching the right buttons. It has huge clear to their purpose buttons, is customizable and a very simple layout with only the essential so it's as least confusing as possible. Your favorite senior can now use a smartphone!

Same for kids, there are simplified/limited ones for kids too.

Going really back, there were plenty of underpowered Android phones. You could replace the launcher for a lighter one, making your phone snappier and faster. I remember installing LauncherPro in pretty much every phone.

Or maybe you just want different looking items for a bit of personal flare. You can easily install a pack of icons from the play store, like Rugos for icons with a crumpled paper effect, etc.

I haven't seen what iOS did for it's launcher yet (I will as soon as I have the chance) so I can't compare yet but historically, it has always been really limited compared to Android launchers. It's just a numbers game, Android has years of creative people pitching ideas and trying out stuff to see what works. iOS going in that direction is great news. I always disliked that home screen full of "cages" (folders) everyone with an iphone seems to have.

I recommend BIG Launcher. There is a demo you can try:

Here are some. No idea how good or bad they are.